Step 4 of ASC 606 requires an allocation of the total consideration in a contract to which an entity is legally entitled to collect to each distinct performance obligation. This allocation is determined based on the standalone selling price of each performance obligation in the contract, the process of which is comprised of two distinct sub-steps:

Exceptions to the process apply for discounts and variable consideration, which are not covered in this post.

What is a Standalone Selling Price?

2. Expected Cost Plus a Margin Approach

An entity could forecast its expected costs of satisfying a performance obligation and then add an appropriate margin for that good or service.

Step 2 of ASC 606 requires identification of distinct performance obligations that have significant standalone functionality. The Distinct Performance Obligations identified in this contract are:

This is billed on a T&E basis.

The Core, Add-On modules and User License have significant standalone functionality as observed by renewals of such SaaS contracts. Annual Support related to hosting and security is never sold standalone and is often priced as a part of the subscription. Enhanced Support is often sold standalone as observed from subsequent renewals.

An analysis of the observable standalone renewal transactions reveals that the Core and the Add-On Modules have an SSP of $60,000 vs. the $49,000 (gross) value on the contract.

Professional Services for the accounting and financial corporation are often performed by third-party vendor partners.

The accounting and financial corporation performed an Adjusted Market Assessment Approach by performing a market analysis of hourly rates for similar services. This analysis revealed an SSP of $145 per hour.

Once the SSP is determined, it will need to be reallocated to the performance obligations prior to any revenue recognition.

In our case, the $10,000 discount is reallocated between Annual Services and Professional Services based on their relative SSP ratio as above. The amount in the accounting unit is the amount over which Revenue Recognition would occur per ASC 606.

The above example is based on a relatively simple SaaS contract. Many complexities exist in today’s environment with hybrid SaaS contracts that involve an element of both License and Subscription services and other complex hosting arrangements. Further, usage-based SaaS contracts are becoming increasingly popular, sometimes with an element of both fixed and variable fee structures. Future discounts and other variable considerations can further complicate accounting.

We also offer a whitepaper to help you through the process of revenue software selection, which you can access by clicking the image below: 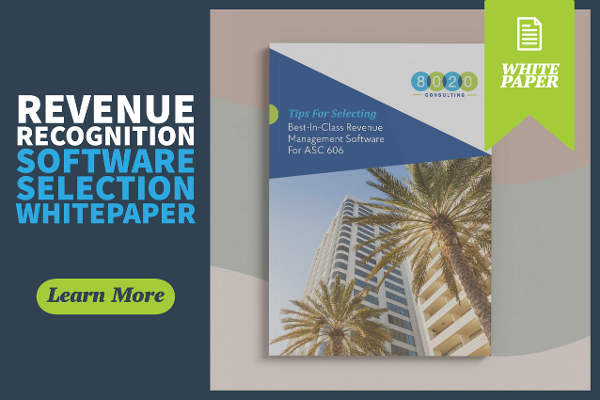